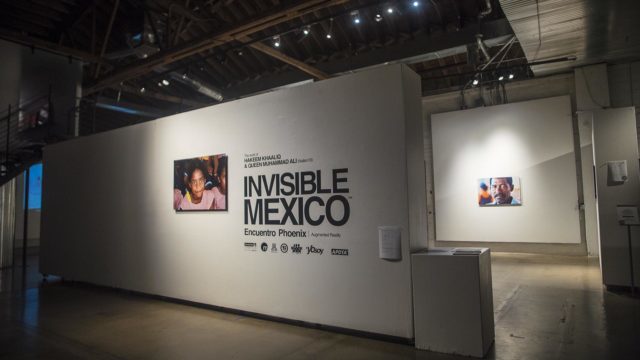 Queen Muhammad Ali and Hakeem Khaaliq, two local visual anthropologists have made it their mission to demystify preconceived notions about black and indigenous communities around the globe.

This is no easy feat since they’re against a historical propensity to blaze inaccurate information about communities of color (at this point we’re all misinformed about everybody else, really), erase or undermine their cultural relevance and contributions to humanity. In our good ol’ AZ we even banned the study of said groups. But they have two powerful tools: art and technology.

A few days ago I was walking down Roosevelt after getting some grub at one of the eateries and inside MonOrchid there was an awesome photograph of a girl’s face, a huge print of one of the most piercing eyes I’ve ever seen… a future Bruja if you will. These eyes have a story, a history. I went in, Invisible Mexico was the title of the exhibit and to its creators, it’s an anthropological portrait of the African Diaspora of settlers in Guerrero, Oaxaca, Veracruz, Chiapas, Michoacán, and other Mexican states.

A crowd was already hurdled around the artists, it was almost inappropriate not to eavesdrop on their narration. It wasn’t just an explanation, they had some techie stuff –augmented reality–, which blew my mind immediately.

Queen and Hakeem have been going back and forth to Mexico since the 90’s for different projects (some we can mention, others not so much). They’ve traveled all over, too many places to list in this poor excuse of a paragraph. However, it is important to mention that their voyages have taken them to places with large Afromexican communities, which are sadly unknown.

Hakeem, originally from South Central L.A. and Queen from L.A. (her ancestry is actually American Samoan royalty), would tell an anecdote behind the picture, where it was taken, the context. With their tablet they would create an interactive environment that immediately connected with the audience, establishing a learning space for everyone.

The actual explanation of augmented reality is quite techie but for the purposes of detailing this exhibit, it means that when you hold your mobile device over one of the photographs, the pictures become animated and provide further information about the image hanging on the wall. This is ain’t magic stuff, though ancient curanderos would freak the f out! This augmented reality experience is a collaboration between Queen, Hakeem, the University of Arizona and Associate Professor Bryan Carter. This effort produced an app for mobile devices which could expand the experience of a gallery to a much broader space, immersing the audience into a different kind of reality: the subjects’ realm.

But beyond the augmentation of an experience, its bi-dimensional reality has a unique depth and behind the photographs displayed, there is a history that has been ignored for a minute or deux. I was confronted with my own ignorance about Afromexican communities in Mexico and here in the U.S. (there’s a large population of Afromexicans in Califas as depicted on this  awesome short).

Hakeem explained the history behind Yanga (Nyanga or Gaspar Yanga), a man from the state of Veracruz whose photograph hangs on a wall of the exhibit. He awoke a whole town and lead them to resist their oppressors. The sound of his name resonated with me, then it hit me. There’s a region in Bolivia, Los Yungas, in the state of La Paz. I’m Bolivian, and my heart has a special place for Saya, a dope Afrobolivian beat. So naturally when he said his name I was curious. There has to be some connection, especially when this Andean tropical forest extends from northern Peru and Argentina, passing through Bolivia and all the way up to Colombia and Venezuela.

What is known about Yanga is that he was apprehended somewhere in the Brong-Ahafo region of Ghana and disembarked in the coast of Veracruz in the 1500’s. He was briefly enslaved until he escaped and lead a 30-year crusade against the Spaniards…¡toma! Actually, he was the first great liberator of the Americas. Way before El Libertador did his thing in South America, Nyanga sealed a treaty with the Spaniards that would allow freemen to live in a sovereign, gachupin-free land in the early 1600’s. Also, the meaning of the word Nyanga will blow your mind, but I’ll come back to that in a bit.

Queen and Hakeem were really impressed with his story, but also realized that a lot of African descendants felt a void in their roots, their history; that there wasn’t an accurate representation of them.

“If we don’t change these stories and the perception people have, no one will,” Said Hakeem.

That is the main reason why they’ve put up this show, a collection of photographs made over a decade of travels through Chiapas, Guerrero, Oaxaca, Veracruz, Tepoztlán, and Costa Chica. Queen explains how the perception that these communities have of themselves has affected their collective self-worth in respect to other Mexicans. I mean, it wasn’t until an internal census in 2015 that they could self identify as Afromexicans. Up until then they didn’t have a box to check. This is precisely why there isn’t a knowledge of the prevalence of African cultures settled in Mexico, because everything was focused on indigenous people or mestizos. Also, Afromexicans aren’t even a considered a minority because, according to the government, they don’t have a native language or dialect. As a consequence, their history has vanished.

The good thing is that there is a new found pride in being Afromexican and now they can identify with their blackness and own it like the woman in this short-doc. Also there are visual artists and anthropologists that constantly travel to these regions and others in the Americas where there are large populations of African descendants and their stories aren’t represented.

Queen and Hakeem’s Invisible Mexico will be at MonOrchid located at 214  E Roosevelt St. until this First Friday 4/7. Check out the space, approach the artists, ask them questions. They’re awesome at sharing knowledge and have a truly keen eye for stories.

Now, are you ready for the meaning of Nyanga? Well, the short answer is witch-doctor, but it’s too generic and whitewashed. Now, Occult Zulu has an interesting interpretation and we kinda like it better. It basically means moon-ritual-person. It turns out that some plants’ properties react to the lunar cycles and in ancient Africa there were special humans that knew when to conduct rituals based on this to increase effectiveness. These special people were viewed as saviors and they called them Nyanga.

You can pay a visit, check the exhibit and feel a little less ignorant about the world you live in. In this case, ignorance is not bliss, it is a sin. Also check this jam, it’s pretty awesome!